The Garden of the Living

In my last blog post, I mentioned posting photos from the Cotswolds trip I went on with Clare Lydon and Harper Bliss. I do plan to share them but closer to the publication of my Cotswolds novel, which is being critiqued.

Today, I want to tell you about my weekend in Concord, Massachusetts. Even though I lived in Boston, which is about twenty-five minutes away, for six years, I didn’t spend much time in Concord. In fact, I only went when I found out we were moving to the UK. It’s so easy to take places for granted.

Now that I’m back in Massachusetts, I want to explore a bit more. Hence, why I spent a weekend in Concord. It’s a cute town with lots of history. Just in case you don’t know, I’m a history nut!

I moseyed over to the Sleepy Hollow Cemetery, dedicated in 1855.  This cemetery has several famous authors buried here, including Louisa May Alcott, Nathaniel Hawthorne, Ralph Waldo Emerson, and Henry David Thoreau. I don’t remember the pens stuck in the ground around Alcott’s grave during my previous visit. 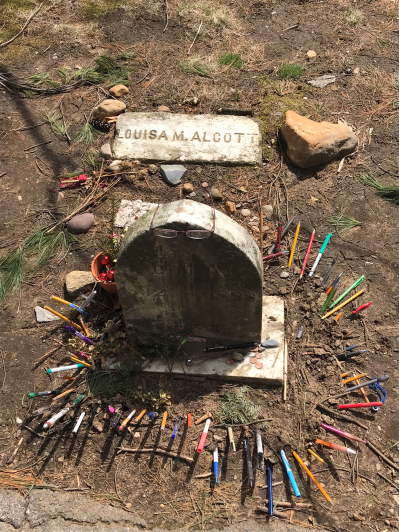 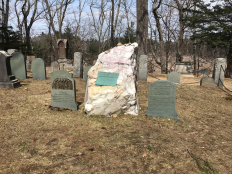 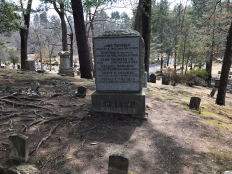 The designers of Sleepy Hollow had close relationships with many members of the Transcendentalism movement, which influenced their design.  According to Emerson, who’d attended the dedication, the end result was, “The garden of the living.”  The cemetery does indeed have a garden feel and many of the trees, plants, and moss were left untouched. 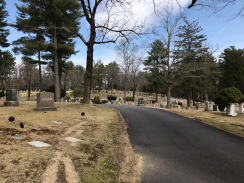 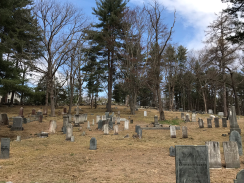 At one point, I noticed a man and woman, with their dog, returning from a wooded area in the back part of the cemetery, and being the curious type, I decided to see where they’d been. Turns out there’s a dirt trail. I only had on flip-flops, but that didn’t deter me from exploring a bit. When I spied another path that was less traveled, I opted for it. There was quite a bit of brush and fallen branches, so I ended up leaving some blood behind after cutting a toe.

But the history nerd inside me did a happy dance when I found a marker saying the colonial militia had passed through the fields during the Revolutionary War. My injured toe was nothing to what many had gone through during the war. 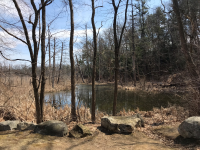 I wonder where in Massachusetts I’ll explore next.

TB Markinson is an American living in England. When she isn’t writing, she’s traveling the world, watching sports on the telly, visiting pubs, or reading. Not necessarily in that order.
View all posts by TBM →
This entry was posted in Life and tagged Concord, Sleepy Hollow Cemetery, The Writer's Life. Bookmark the permalink.

1 Response to The Garden of the Living