Do They Still Feel You Up at Fenway?

It takes me time to become comfortable enough in a place before I can include a setting in a novel. Some of my books take place in Colorado, where I went to high school and college. I ended up loving Fort Collins, where the university was, and stayed there until my early thirties.

Naturally, A Woman Lost, my first novel, is set in Fort Collins.

After living in Boston for over six years, I felt like I had a handle on the place and could include it in Confessions from a Coffee Shop. I’m not officially a Masshole, but it was easier for me to have a sense of the place.

Writing about the United Kingdom took longer because I had a lot going against me. Even though I ended up living in the UK for seven years, I was initially an outsider moving to another country I’d never been to before, aside from an unpleasant visit to one of the airports. My experience will always be different than someone born and raised in London. Although I lived there for many years, by the time I penned my first book set there, I was cautious enough to include a character in A Shot at Love I could relate to somewhat by making her half British half American.

Now that I’m back in the US after eight years of living in the UK and Ireland, I’m having to reacquaint myself with American settings, which is a weird. I’m American, but I feel like an outsider now.

In my recent release, Reservations of the Heart, there’s a scene that takes place at Fenway, one of America’s oldest baseball parks. It’d been years since I attended a game. Before I moved to the UK, we’d go several times a season, and I distinctly remember security people searching bags and then patting everyone down.

Originally, I wrote the scene in Reservations this way. But I started to think back to the last time I’d been to Fenway, and I realized things might have changed. What’s a writer and sports fan to do? Buy tickets for a game, of course.

The day I could get tickets for was Mother’s Day. I grabbed them a few weeks before, and the baseball gods weren’t looking out for me, since that particular Sunday in May was cold, rainy, and miserable. I was told I’d be going alone, which is understandable because it really was atrocious weather.

I put on my rain jacket and boots for the journey. Before heading out, I had to look at the map to find the correct side street I wanted. Before the move to the UK, I used to walk to work and I went by Fenway five days a week. It’s amazing how much you forget over the years.

Since the day was extremely unpleasant, Fenway wasn’t as crowded as normal. I was able to snap quite a few photos in areas that were typically mobbed. After going through the security measures, which now involve metal detectors (a relief since I’m not big on people I don’t know feeling me up), I explored a bit. When I got to my seat, which was soaking wet, I opted to get some photos for the atmosphere.

At one point, in the third inning, I heard a woman say to her grown son, “I really appreciate the tickets and spending the day with you on Mother’s Day, but I’m cold so let’s get together next weekend. Toodles.” I may have added the toodles part, but it seemed like the time to use it.

I was right there with her. I left soon after that and met my peeps at a bar close by to finish the game while drinking a hot toddy to warm up.

I ended up going back to Fenway this summer, which was a hot day. I stuck around for that game.

To celebrate the release of my latest novel, I’ve put together a giveaway, which will include a signed copy of Reservations of the Heart and a $50 Amazon gift card. 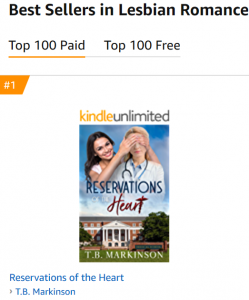 A bit about Reservations:

When Stella and Aurora unexpectedly come together, sparks fly. Neither is looking for a relationship, but what they discover in one another is so much more than a physical connection. Can two wounded women who believe love is the last thing they want overcome their fears to find healing?

Thanks so much for reading!

TB Markinson is an American living in England. When she isn’t writing, she’s traveling the world, watching sports on the telly, visiting pubs, or reading. Not necessarily in that order.
View all posts by TBM →
This entry was posted in Writing and tagged A Writer's Life, Fenway, Lesbian Romance, Red Sox, Reservations of the Heart. Bookmark the permalink.

3 Responses to Do They Still Feel You Up at Fenway?