Last year, I visited Hull, Massachusetts, and I posted a blog post on my author’s site, but I didn’t divulge the secret reason I went. I mean, I did go because I needed time away to work, which I did.

But there was another reason as well. This was around the time I was outlining A Shot at Love and another project called Sea. The name Sea morphed into Holly & Ivy, and it’s the novel I cowrote with Miranda MacLeod.

When we started tossing around settings for the romance, Miranda suggested an island based on Vinalhaven, which is off the coast of Maine. She had visited the place the previous year. I’d never been, and given it was during the off-season, the island was shut down for tourists and wouldn’t be back in business for many weeks.

In order to get into the spirit of being in a small seaside place, I opted to go to Hull, somewhere I’d never been to. Much like our fictional island, Hull is mostly a summer destination. Considering the majority of the book takes place in the off-season, I got a good feel of how things would be when there aren’t any tourists.

Also, I went for daily strolls along the beach, which soothed the Californian inside me. While I haven’t lived there in many years, I still seek out water, whether it be rivers, streams, lakes, or reservoirs. Water soothes me, and the ocean has the biggest impact on my well-being. Even though Hull technically isn’t an island, it let me tap into the spirit of our fictional one in Holly & Ivy.

And now that it’s been published, I can come completely clean about my trip to Hull.

One of the perks of being a writer is having an excuse to go to places not usually visited that time of year. I was asked many times by the locals why in the heck I was there when it was frozen over. I kept saying, “Isn’t this the best time?” They gave me a weird look, but I get that look a lot. I have a feeling if I said I wasn’t a people person, they probably still would have given me that look. 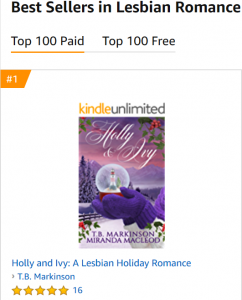 When Holly and Ivy meet, sparks fly, but it’s hardly smooth sailing. After their one-night stand ends in disaster, both decide they’d rather spend the cold months ahead sleeping alone. However, it soon becomes undeniable that each woman possesses something the other needs. Working together, they just might get what they want and find the love of a lifetime along the way, but only if their own insecurities and secrets don’t destroy them first.

TB Markinson is an American living in England. When she isn’t writing, she’s traveling the world, watching sports on the telly, visiting pubs, or reading. Not necessarily in that order.
View all posts by TBM →
This entry was posted in Writing and tagged Holly & Ivy, Lesbian Fiction, Lesbian Romance, Miranda MacLeod, TB Markinson, The Writer's Life. Bookmark the permalink.