Sometimes cowriting with an author, even one who is a good friend, presents awkward moments.

For those of you who listen to the Lesbians Who Write podcast, you’ve probably picked up on the fact that I’m terribly shy when it comes to sex scenes.

As it turns out, I’m also extremely timid when it comes to giving praise after reading a coauthor’s sex scene. Honestly, there’s a sentence I never fathomed penning.

Before I get to the sex bit (sorry), I think I should outline our cowriting process. Since Clare lives in London, which is five hours ahead, every day she’d write her chapter and add it to our shared doc. I would read it first thing in the morning, and then I’d write my chapter. When finished, I added it for Clare to read the following day.

In One Golden Summer, Clare had the pleasure (or torture) of writing the first sex scene.

On sex day, when I clocked into the office (aka my apartment, but office sounds fancier), I opened the document and read the scene. I thought it was hot, but I didn’t know how to text good sex today without sounding creepy. Even just writing good job today seemed over-the-top to me, the American prude.

So, I did what I normally do when I don’t know how to react. Nothing. I didn’t say a peep.

The next time we spoke on Skype, Clare asked me (she’s not shy when it comes to these things) what I thought about the sex scene. I’m sure my face went up in flames, but I did muster the courage to apologize for not speaking sooner. She’s seen me squirm when discussing it on the podcast, so she understood.

Now, I need to recover from reliving this episode. 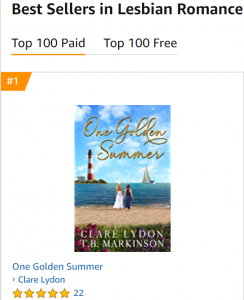 Would you trade fame for love?

Only one problem: she hates it.

She flees to her sister’s seaside town – where she meets the confident & charming Kirsty McBride.

Kirsty is everything Saffron wants to be. Perhaps also, everything she wants.

But Saffron can’t have it all. So now, she has to decide: does she crave Kirsty enough to blow up her golden life?

Best-selling lesbian romance authors Clare Lydon & TB Markinson have written a sizzling lesbian love story about not being afraid and going after what you really want.

TB Markinson is an American who's recently returned to the US after a seven-year stint in the UK and Ireland. When she isn't writing, she's traveling the world, watching sports on the telly, visiting pubs in New England, or reading. Not necessarily in that order. Her novels have hit Amazon bestseller lists for lesbian fiction and lesbian romance. She cohosts the Lesbians Who Write Podcast (lesbianswhowrite.com) with Clare Lydon. TB also runs I Heart Lesfic (iheartlesfic.com), a place for authors and fans of lesfic to come together to celebrate lesbian fiction.
View all posts by TBM →
This entry was posted in A Writer's Life and tagged A Writer's Life, Clare Lydon, Lesbian Fiction, Lesbian Romance, One Golden Summer. Bookmark the permalink.

4 Responses to How do you say…?